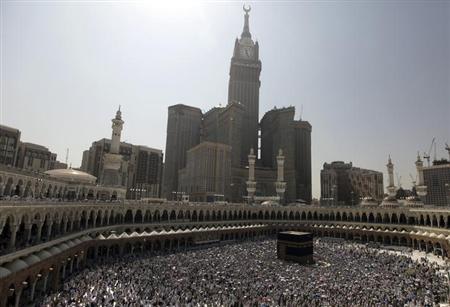 RIYADH (Reuters) - Saudi Arabia's religious authorities on Wednesday approved a request by the government to reduce the number of pilgrims permitted at Islam's annual haj this year to allow expansion work at Mecca's Grand Mosque.

The decision to reduce numbers from abroad by a fifth, and from inside Saudi Arabia by half, comes as the kingdom's authorities attempt to contain the SARS-like coronavirus MERS, but the authorities drew no link between the issues.

Last year more than 3 million pilgrims travelled to Mecca for the pilgrimage, which all Muslims must perform at least once in their lifetime, if they are capable.

The ruling al-Saud family stakes much of its legitimacy on its guardianship of Islam's holiest sites in Mecca and Medina and has in recent years spent billions of dollars to expand the main pilgrimage areas and improve their safty.

But critics have also attacked the conservative Sunni dynasty for razing some historical sites that date from the time of the Prophet Mohammed and are particularly important to Shi'ite Muslims in order to facilitate the expansion programmes.

In statements carried by the official Saudi Press Agency on Wednesday, the Supreme Judicial Council said the reduction in pilgrim numbers was legitimate to ensure safety while work was carried out to allow more pilgrims to come in future.

Similar statements were made by top officials at the Prophet's Mosque in Medina and the Great Mosque in Mecca.

Saudi Arabia has so far had 62 confirmed cases of MERS, a respiratory infection, of which 34 patients died.

On Saturday international health experts meeting at the World Health Organisation's Cairo office said countries where MERS was a risk should put in place plans to handle any mass public gatherings.

This year haj will be in October, but many pilgrims will also seek to visit Mecca in July during the fasting month of Ramadan. (Reporting by Angus McDowall; Editing by Alison Williams)